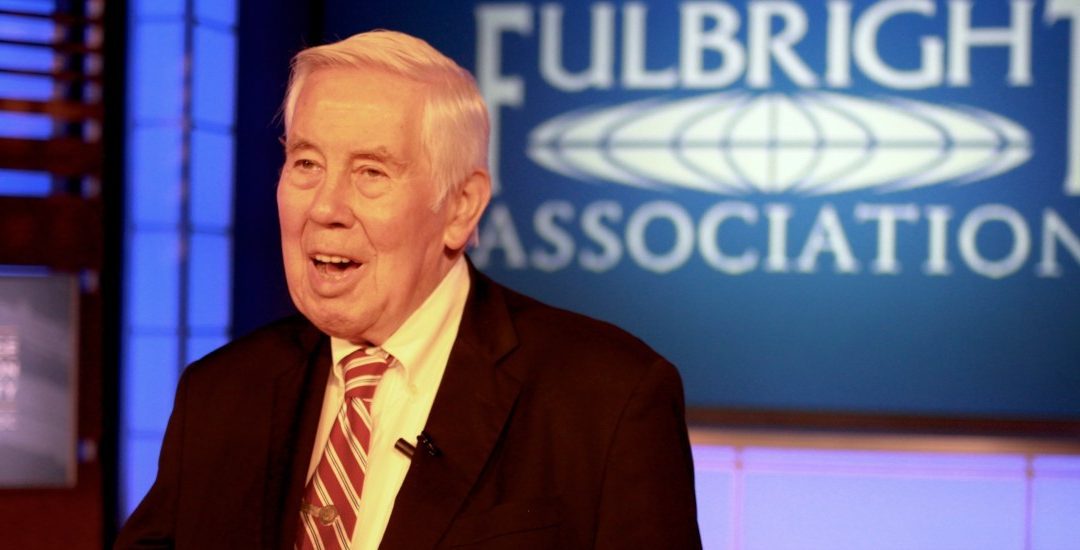 The Fulbright Association mourns the passing of Richard Lugar, former Indiana senator and the 2016 recipient of the J. William Fulbright Prize for International Understanding. Senator Lugar was known for his leadership in foreign policy, his bipartisanship approach to decision-making, and his passion for pursuing global citizenship. His political career, marked with compassion and pragmatism, won him the respect and friendship of Republicans and Democrats alike.

As a Fulbright Prize laureate, the Association recognized Lugar’s support of international diplomacy. Serving as the Chair of the Senate Foreign Relations Committee from 1985-87 and again from 2003-07, Senator Lugar occupied the position that Senator Fulbright himself once held. In response to the attacks on September 11, 2001, he co-sponsored the Kennedy-Lugar Youth Exchange Study Program, which awards scholarships to students from countries with significant Muslim populations to study in the United States. He was a strong supporter of nuclear nonproliferation, and co-sponsored the Nunn–Lugar Cooperative Threat Reduction Program.

“It’s important because the Program is fundamental, not only to the foreign policy of the United States, but to the building of relationships among nations,” said Senator Lugar on his strong support for the Fulbright Program. “The opportunity for students – who are going to be leaders – to be in other environments, to understand different disciplines, different histories, is a remarkable explosion of talent and interest. The momentum of this must continue.”

He was awarded the Prize in a ceremony that was followed by the opening ceremony of the 2016 annual conference in Washington, DC. Representative Joaquin Castro (Texas District 20) attended to give a speech in his honor. The Prize recognizes and rewards outstanding contributions toward bringing peoples, cultures, or nations to greater understanding of others. Other awardees include South African president Nelson Mandela, United States president Jimmy Carter, Secretary-General to the United Nations Kofi Annan, and most recently, German Chancellor Angela Merkel.

“When he walked across the stage at our 2016 conference, Richard Lugar carried with him the seriousness of purpose that characterized his work and a vision of  hope, like that of Senator Fulbright, that we could shape a better world,” said Nancy Neill, who presented the Prize to Senator Lugar as the 2016 President of the Fulbright Association.

Among Senator Lugar’s many other accolades, former president Obama awarded him the Presidential Medal of Freedom in 2013. Along with Senator Joe Biden, his partner on the Senate Committee on Foreign Relations, received the Crescent of Pakistan in recognition for his multifaceted support for Pakistan in 2008. In 2005, the American Foreign Service Association awarded him the Lifetime Contributions to American Diplomacy Award. His legacy continues in the Lugar Center, a nonprofit and bipartisan public policy institution established to provide research-based advice on some of the issues most important to the senator: global food security, the nonproliferation of weapons of mass destruction, foreign aid effectiveness, and bipartisan governance.

Senator Lugar will be remembered as a dear friend to the Fulbright community.